One of the policy options being discussed at the U.N. Conference on Climate Change in Copenhagen, is the link between carbon prices and greenhouse gas emissions. The basis for this policy option is an efficient price of carbon serves as an effective means for curbing greenhouse gas emissions. And the rationale for using carbon pricing is that carbon emissions are considered a negative externality, a negative effect on a party not directly involved in a transaction, which results in a market failure.

Setting an appropriate price floor for carbon is not an easy task. The difficulty in setting a carbon price is that if it is too high, or too low, the unintended consequences of such an action results in an inability of government being able to protect many consumers who would be affected by this pricing scheme. In some cases, an inappropriate pricing mechanism can actually hurt the individuals who were intended to be protected. The problem of trying to set a carbon price is that it distorts the allocation of resources where prices that are too high tend to cause surpluses and prices which are too low tend to cause shortages.

To get a sense of carbon prices and emissions reductions, I have outlined a table that summarizes the work of William Nordhaus, a leading environmental economist at Yale whose Dynamic Integrated model of Climate and the Economy (DICE) estimates the cost-benefit of various policy proposals for curbing greenhouse gas emissions.

The DICE model focuses on the economics of climate change that links factors affecting economic growth, CO2 emissions, the carbon cycle, climate change, climate damages, and climate-change policies. The underlying assumption of the model is that it views the economics of climate change from the perspective of growth theory; that is, economies make investments in capital, education, and technologies, thereby abstaining from consumption today, in order to increase consumption in the future. I have listed the results of few policy options that have been estimated using the DICE model in the table below.

The first policy option listed in the DICE table is the business-as-usual approach; this means no restrictions on carbon dioxide emissions. The estimated damage of doing nothing amounts to approximately $23 trillion in current dollars by the year 2100. The second kind is the “optimal policy,” judged by Nordhaus to be the most cost-effective, with a worldwide tax on carbon emissions adjusted each year to give the maximum aggregate economic gain as calculated by DICE. The third and fourth approaches are options based on the Stern and Gore approaches. The Stern policy option imposes severe limits on emissions that are much stronger than those included in the Kyoto Protocol. The Gore approach results in dramatic emissions reductions which reach 90 percent of current levels before the year 2050.

The economic problems with the Gore and Stern strategies, though they both have high emissions control rates and carbon prices, is that the high emissions controls (80-90% for 1990 levels) require carbon prices which range from $600 to $900 per ton of carbon. The total cost of the Stern Plan is $37T and the Gore Plan is $44T in 2005 dollars. The dislocations involved from either option results in prices that are extremely large, which result in severe economic costs.

So from these options, where do the two major proposals circulating in the U.S. Congress stand regarding carbon pricing? The Waxman-Markey and Boxer-Kerry have estimated carbon prices of about $20 per ton where 85% of the emissions permits would be given away to polluters and the Boxer-Kerry bill is about $15 per ton to at least 2019. Currently the recommended price is about $40 per ton with it doubling in 40 years. Unfortunately both U.S. bills do not provide adequate price floors to curb emissions. More to come…

To test this proposition, I used survey questions on climate change and global warming from Pew survey data from June 2006, January 2007, and April 2008. I combined all three surveys into one master dataset in order to account for variation across samples and time in order to conduct an inferential statistical model to estimate individuals’ responses controlling for partisanship, socio-economic status, and respondents’ ideology. 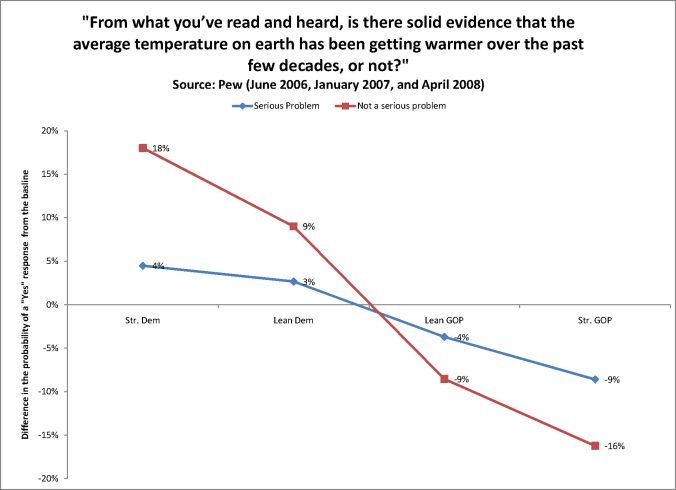 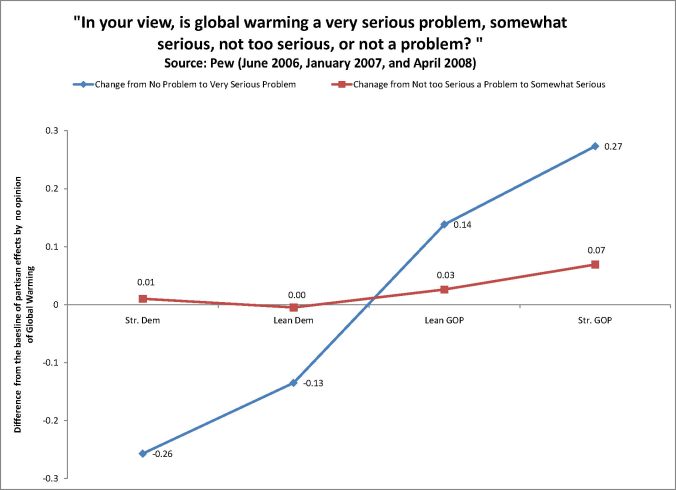 The data show that individuals construct their opinions on climate change based on heuristics which tend to bias their opinions on this issue. The most prominent heuristic used by individuals is partisanship. Thus, partisan preferences explain approximately 40% of individuals’ responses to this item, other things being equal. To understand how partisanship biases individuals’ attitudes on climate change, I have illustrated differences among partisan regarding whether there is solid evidence supporting global warming and the degree of seriousness of this issue. The above charts show significant differences between Democrats and Republicans on each question. Democrats overwhelmingly agree with both statements while Republicans remain skeptical.

So what can we expect from policymakers regarding this phenomenon? Namely that proponents, and opponents, of this policy have an opportunity to distort the facts surrounding the policy outcomes which deal with climate change because individuals’ views on this issue tend to be biased by their partisanship and political ideology.